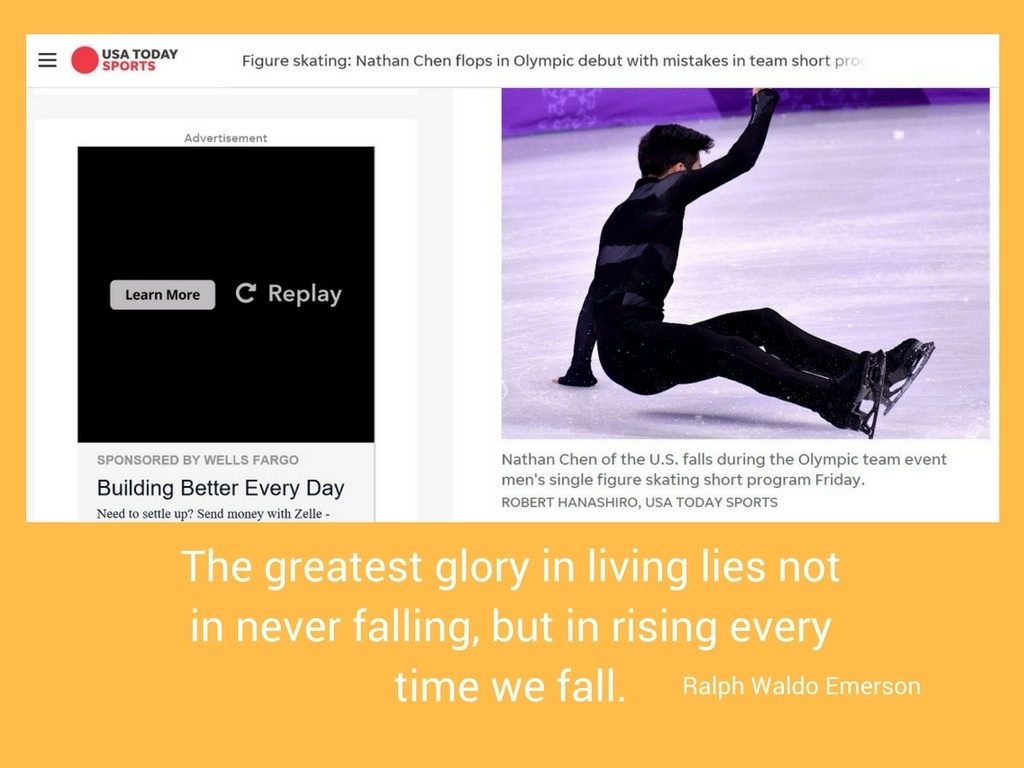 Everyone can fail, but to do it on an international arena and come back takes a real professional. And when you as a small business owner or manager competing in your local arena, you will, at some point, experience failure too. Like Nathan Chen, the US gold medal front-runner at the 2018 Winter Olympics, he fell during the Men’s Figure Skating Short Program but bounced back. Later he was the winner in the free skate and set an Olympic record.

You will fail and make mistakes at times in your life; you may want to run away and hide from the embarrassment. But, to fail on the international scene in PyeongChang with millions watching and get up and continue to put on a world class performance without running away takes a true professional, a master performer.

As a result, Chen dropped from gold medal contender to number 17. What happened? It doesn’t matter to the world. What matters is that he came back on the long program when “Chen soared into first place by becoming the first skater in Olympic history to land five clean quadruple jumps, and a sixth with a hand down, in the long program.” This particular victory failed to earn him an Olympic medal, yet it pulled him all the way to fifth overall in the men’s individual figure skating.

It isn’t lack of failing that makes one a champion; it’s getting back up and continuing until you win. The ideal role model is the one who can flub up under those circumstances and, literally, bounce back up and continue with an incredible performance despite that mistake.

It isn’t lack of failing that makes one a champion; it’s getting back up and continuing until you win.

Assuming you are putting yourself out there with new ideas and new projects, you will fail, and other times, you will soar. This applies to presentations you make too whether to prospects, customers, your boss, fellow employee or, maybe, an association or church group. So, how do you train yourself to turn from failure to winner?

How to Train Yourself to Overcome Failure

Anyone who takes any risks will eventually stumble. So, how do you learn to rise above the crowd when you know that you will likely fail at some point? Choose from the following seven techniques to create your own path to winning.

This calls for finding your own internal motivation. Know why you want this particular accomplishment then focus your energies on achieving it. This desire must be strong enough that you prioritize the time needed to become exceptional as well as intense enough that you will push yourself past embarrassment and humiliation when you must return from a failure.

Not that becoming world-class means that you won’t ever fail again, look at Nathan Chen in the 2018 Winter Olympics, but that amount of practice and skill means that you will be able to recover and still shine, like Nathan who went on after failure to set an Olympic record. Wikipedia reported that he is the “first man to attempt six quads and land five quads cleanly in a program at the Olympics… He placed first in the free skate with a score of 215.08, the highest in Olympic history.”

In his bestselling book, Outliers: The Story of Success, Malcolm Gladwell quoted the neurologist Daniel Levitin,

“The emerging picture from such studies is that ten thousand hours of practice is required to achieve the level of mastery associated with being a world-class expert – in anything.” He continues, “In study after study, of composers, basketball players, fiction writers, ice skaters, concert pianists, chess players, master criminals, and what have you, this number comes up again and again.” (p. 40)

On June 1, 1960, Maxwell Maltz came out with his book, Psycho-cybernetics, and describe a blind test with three groups of high school basketball players. The astonishing thing at that time was that the group which physically practiced one day a week and visualized playing the other four days improved almost as much as those who practiced physically five days a week. The current version of this classic is Psycho-Cybernetics: Updated and Expanded.

Today, the US Olympic Committee takes multiple sports psychologists with them to competitions and the teams have several to assist in training athletes to use the mental techniques of visualization, sometimes called imagery or mental rehearsal. In The Washington Post article, “For Olympians, seeing (in their minds) is believing (it can happen),” July 28, 2016, Rick Maese, reported:

“The science increasingly reveals the impact mental training and visualization can have on performance. Richard Suinn is an esteemed sports psychologist who first began working with Olympic athletes in 1972 and has been a proponent of visualization techniques for years. He studied downhill skiers and found that when he asked them to simply imagine skiing, the brain sent electrical signals comparable to when the athlete was actually skiing, and the muscles reacted similarly as well. Other studies have found that visualization exercises also trigger responses from the autonomic nervous system, and there’s been plenty of research to show the practical impact these techniques have on performance.”

According to Ellen Michaud in her "12 Ways To Forgive Yourself—No Matter What You've Done,” psychologist Fred Luskin, PhD, director of the Stanford University Forgiveness Project, pointed out that:

“Amazingly, the biggest obstacle he's found to self-forgiveness may be the tendency we have to wallow in our own guilt. ‘It's not just that we feel bad because we know we've done wrong,’ he explains. Everybody does that. But some of us actually draw those bad feelings around ourselves like a blanket, cover our heads, and refuse to stop the wailing.”

He went on to give techniques to forgive yourself. Of them, one of the biggest was to take action to correct things.

While forgiving yourself, ask what you learned from this experience. One time, I corrected my boss in front of a major client. I felt terrible about it and groveled on the way back to the office. While I recovered enough to show up for work the next day, it took me years to realize that while I may have violated business protocol, I lived according to my personal ethic not to lie to customers. My boss wasn’t actually lying. However, his phrasing would mislead our customer.

Recognize failure is the key to ultimate success

We learn by failure. We just get up and do it again and again until we master the skill. Three examples are the following:

The classic example of this is “baby steps.” Babies captivate every group as they watch the infant pull itself up and struggle to take those first steps. Ironically, parents switch from encouragement and excitement about those first baby steps and first words to humiliation as the child gets a few years older. Both impatience and embarrassed seem to motivate this Jekyll and Hyde switch from supportive to critical.

We get so used to rockets going into space that one exploding, like when “January 28, 1986, … the tenth flight of Space Shuttle Challenger (OV-99) broke apart 73 seconds into its flight, killing all seven crew members,” (Wikipedia) is the exception and spectacularly newsworthy. What we don’t realize is how often in the beginning stages, the companies putting together the rockets had to work their way through failure after failure and keep slugging until they get it right.

For instance, Ashlee Vance wrote in Elon Musk: Tesla, SpaceX, and the Quest for a Fantastic Future (pp. 123-124), that

“The arrival of the engine in Texas kicked off one of the great bonding exercises in SpaceX’s history. Amid rattlesnakes, fire ants, isolation, and searing heat, the group led by Buzza and Mueller began the process of exploring every intricacy of the engines. It was a high-pressure slog full of explosions—or what the engineers politely called “rapid unscheduled disassemblies”—that would determine whether a small band of engineers really could match the effort and skill of nation-states.”

Reframe what appeared to be failure

Two famous generals in history stumbled when coming ashore to conquer new lands. These stumbles could have been incredible disasters for their campaigns. Instead, they embraced them and reframed a disaster into a positive omen. Sacred Texts reported these two events:

Put a Positive Spin on Your Self-Talk

If you’ve ever taken even the most basic course on computer programming, you know how computers are like idiot savants. When it comes to following instructions, they are brilliant and extraordinarily obedient. They will do exactly what you tell them to do – and only what you tell them to do. Your mind, especially the subconscious, functions like a computer. In American society, you have picked up some “throw away” kinds of expressions that you don’t think about yet use all the time.

For instance, “I fear that…” is very common when what you mean is that you “know that” something is going to happen. Yet this expression tells your subconscious that you are afraid. Take the few seconds necessary to reprogram you subconscious: the next time you say something that can hurt your performance, your self-confidence, or your self-esteem, change it.

In your small business life or your sales career, you will eventually experience failure at something you thought you were well prepared for. Just like Nathan Chen, the gold medal hopeful on the US 2018 Olympic Men’s Figure Skating Team, when you fail, you can bounce back up and become a winner still. These seven techniques can help you train yourself to handle failure and still come out a winner. They are a combination of physical activities and mindset, like putting a positive spin on your self-talk.

So, in your small business or sales career, find your own drive and motivation that will pull you through when things go wrong, and your plans fail to manifest that perfect performance. When you fall on your butt, bounce back up, continue as best you can. You can train yourself to recognize failure as part of your path to becoming a winner.

You can train yourself to recognize failure as part of your path to becoming a winner.

Do you love taking care of your customers and prospects? If you yearn to build more long-term business connections with your customers, get your copy of the Amazon Kindle eBook:

More by this author

Your Self-Talk May Be Hurting You

How Honest Are You Really?